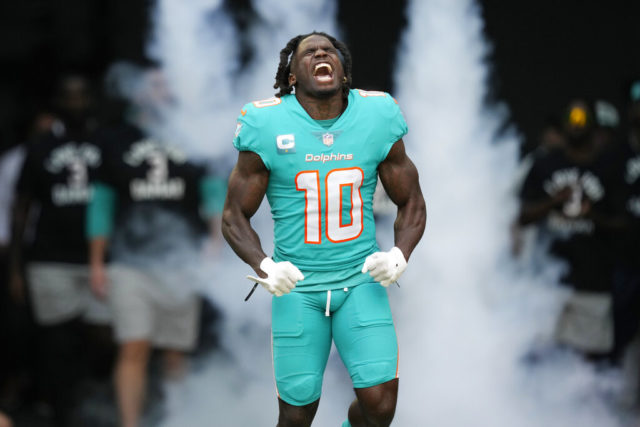 Miami Dolphins wide receiver Tyreek Hill (10) reacts as he is introduced before the first half of an NFL football game against the New York Jets, Sunday, Jan. 8, 2023, in Miami Gardens, Fla. (AP Photo/Rebecca Blackwell)

The Buffalo Bills held off the Miami Dolphins and won their wild-card matchup 34-31 at Highmark Stadium yesterday.

He also had two interceptions and lost a fumble that resulted in a touchdown.

Buffalo is back in the divisional round of the NFL playoffs for the third consecutive season.

Miami is still without a playoff win since the 2000 season.

A few outside upgrades aside, eager to see this team, if possible, with 1) healthy Tua; 2) better, more durable backup QB; 3) Ogbah returning to 20 and 21 form; 4) Chubb returning to Denver form ; 5) healthy Mostert and Brandon Jones in playoffs.

The Bills take on the Bengals at 3 p.m. on Sunday.